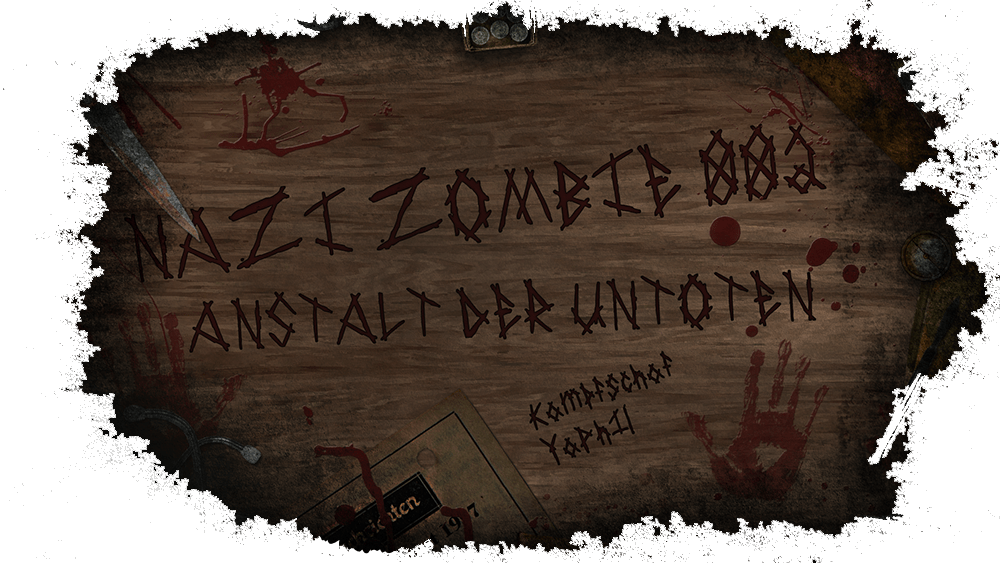 Changelog v1.1:
– Fixed several places where players could glitch out of the map
– Changed objective system to use CoD’s system, you can now always view the objectives by pressing Tab in solo / Esc in coop
(We left the objective button in the map, but it is useless now, it’ll just tell you which button to press in order to show the objectives)

Story-Timeline:
1942, during WWII.
The U.S. government got information about Germany’s experiments with element 115. They launch their own program at the Eastern State Penitentiary, Philadelphia. They use the prisoners as test subjects.

Early 1944
More and more prisoners die. The researchers suspect element 115 to be the cause.

Early 1945
Almost all prisoners are dead because of the experiments. The prison is now a graveyard.

March 1945, 2 months before end of WWII.
The program is suddenly stopped by the government. The researchers leave the Eastern State.

1947, about one year after the events of “Der Riese”.
Dr. Richtofen was finally able to find out where the USA experimented with element 115, as there are more and more reports about suspicious events. The team of four travels to the Eastern State, trying to prevent the inevitable.

A letter from Dr. Gordon A. Rand: * It is a replica of the famous place “Eastern State Prison” in Philadelphia
* Extremly huge map with over 200 different cells
* Weather ambient: rain
* 10 Powerups  (see pictures)
* 9 Perks (see pictures)
* Higher powerup limit per round
* Fixed Jugger-Nog and Wunderwaffe
* Players start with 0 points
* Zombies have glowing eyes (yay!)
* Ray Gun more common in box
* Double Points affects Nuke’s and Carpenter’s points
* Laststand logic will always give the best pistol available instead of just the first it finds
* Randomized hero characters
* Black Ops’ viewhands for every character
* Pack-a-Punch Machine
* Upgraded Wunderwaffe can kill more zombies than non-upgraded variant
* DP-28 (from multiplayer) and Double-barreled sawed-off
* Fully working & upgradable Ballistic Knife
* 7 Songs in the music box and 4 easter egg songs
* A time counter how long you need to buy the Ending (Beat the High-Scores of other players)
* Ammocrate (buyable)
* Black & White Screen until you turn the power on
* Buyable ending (cost depends on number of players)
* Custom Menumusic (By TheRedPain)
* Custom Zombieskins (Prisoneroutfit)
* Many Easter Eggs (some extremly hidden)
* A system to share points with your coop teammates
* And a place where you can put your weapon to share with others
* Box allows everyone to grab a weapon after some time
* Custom Healthbar and Zombiecounter HUD
* Customized Score HUD
* Objective-based gameplay for the ending
* Objective that requires coordination of coop players (aka “Coop Switches”)
* Endboss with a lot of f*cking HP
* Too many dog spawners
* Customized number of dogs
* Mid-Round dog spawns in certain areas only
* A Zapper, of course
* Pause which stops the next round from starting (buyable, limited number of times)

Quick Revive: Gives a second chance in Solo; Reduces revive time by half and grants owner 50% longer down time in Coop

Mule Kick: Allows you to carry three weapons (needs to be unlocked by an objective)

Tufbrew: Grants a 50% damage bonus for all bullet weapons (adds onto Deadshot)

Instakill: Any means of damage will instantly kill the zombie for 30 seconds

Max Ammo: Refills all your ammo (Bouncing Betty ammo too)

Nuke: Kills all zombies currently alive (they will not hit you after you picked up the powerup)

Carpenter: “I’m boarding all the windows, don’t help or anything” – Nikolai Belinski

Bonfire Sale: Reduces the cost of the Pack-A-Punch machine to 1000 for 30 seconds

Bonus Points: Gives every player a random amount of points (scales with rounds)

Fire Sale: Reduces box cost to 10 and spawns box at every location for 30 seconds

Random Perk: Gives every player a randomly chosen perk, fills ammo of the emptiest weapon if no perk can be given

Unlimited Ammo: Primary weapon’s ammo will not deplete for 30 seconds
Special Thanks:
For list of credits, press “Credits” in the main menu (or even better, beat the map in Solo)