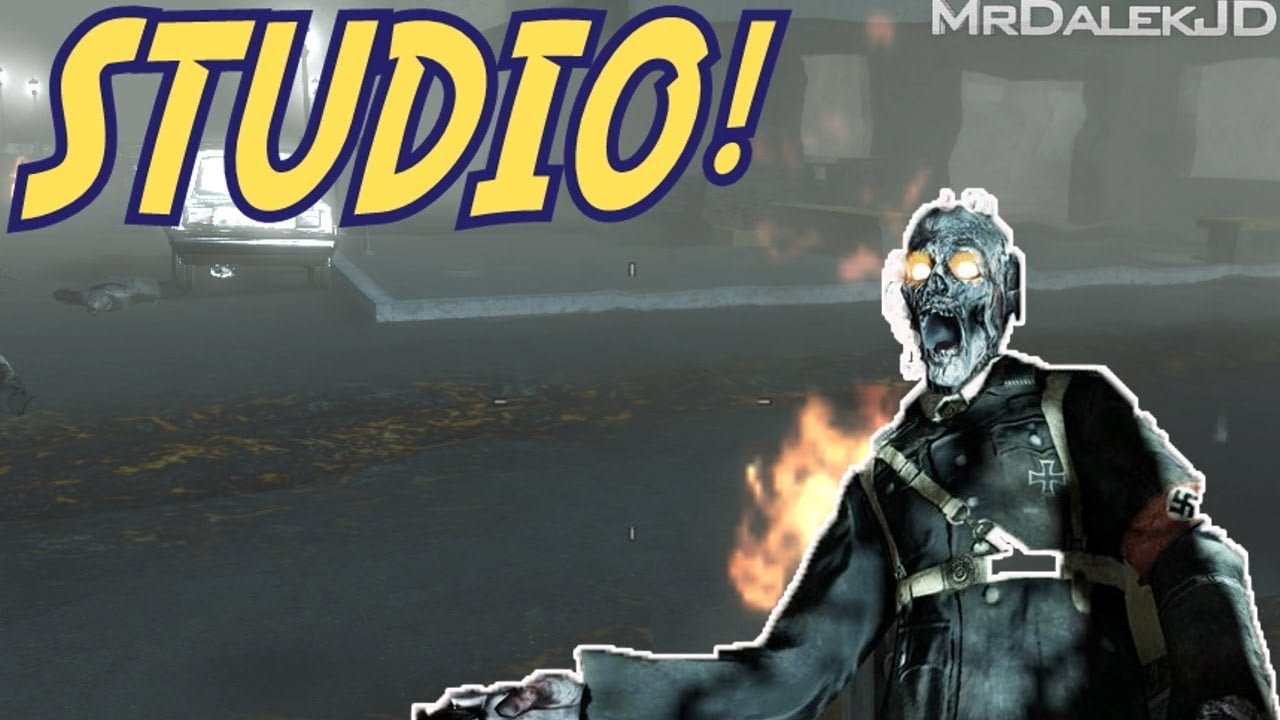 The Basics: Set in a movie studio or video game development studio or maybe even a studio apartment. Not sure exactly but it’s tucked away out in the woods where any self-respecting business would be conveniently located.

What we liked: As a fan of zNiiC’s previous maps Gas Station and Ski Resort with their creepy ambiance and weather conditions all around you I had high hopes for this map visually and zNiiC did not disappoint; he certainly knows how to give a map great atmosphere and Studio is no exception. This time around though he introduces a series of earthquakes that change the appearance of the map; not a huge thing, but it was a nice touch. The fire effects around the map represented by damaged pipes spraying streams of ignited gas into the air was also unique and added to the overall presentation of the map as does the dense fog and flashes of lighting.
There is a buildable power switch and buildable PAP machine which gives you something to do on the map past mere survival and it was also fun to be able to get onto the roofs of some of the buildings and fight the zombies at a little different altitude.
Also accompanying the standard WAW perks are Black Ops perks along with Electric Cherry and Vulture Aid to give you a good number of options to choose from.

What we didn’t like: There is, however, a serious lack of staying power in this map. Once you’ve assembled the buildables there isn’t much to do other than maybe collect perks and save up for the 35k buyable ending. The parts that you do pick up for the buildables don’t show up anywhere on your HUD so you’ll just need to remember what you’ve already picked up.
Pack-A-Punching some of the Black Ops guns gives you upgraded versions of WAW guns instead which is strange. Many of the weapons also use incorrect sounds and animations which doesn’t bother me terribly and the mapper mentioned that the issues with the guns are due to him using a mod that is still in beta; nevertheless, it’s somewhat annoying and sadly does take away from the experience some.
Also, lets say you buy 4 perks including Quick Revive and then get downed, well the game still thinks you have reached your perk limit and won’t let you buy more.
BUT, by far the most annoying thing about this map was the number of times my game would temporarily freeze before resuming itself a moment later. Out of the half-dozen times I played this map it averaged about 5 freezes a game; this really needed to be fixed.

Final Word: I wanted SO badly to like this map and I think I still do to a degree. It’s just that it felt so unbalanced with its good visuals and fun layout, but then just got throttled by glitches, weapon compromises and lack of a reason to keep playing after the first 15 minutes or so. It certainly deserves to be played and there is some fun to be had, but your going to have to be willing to look past some things in order to do it.