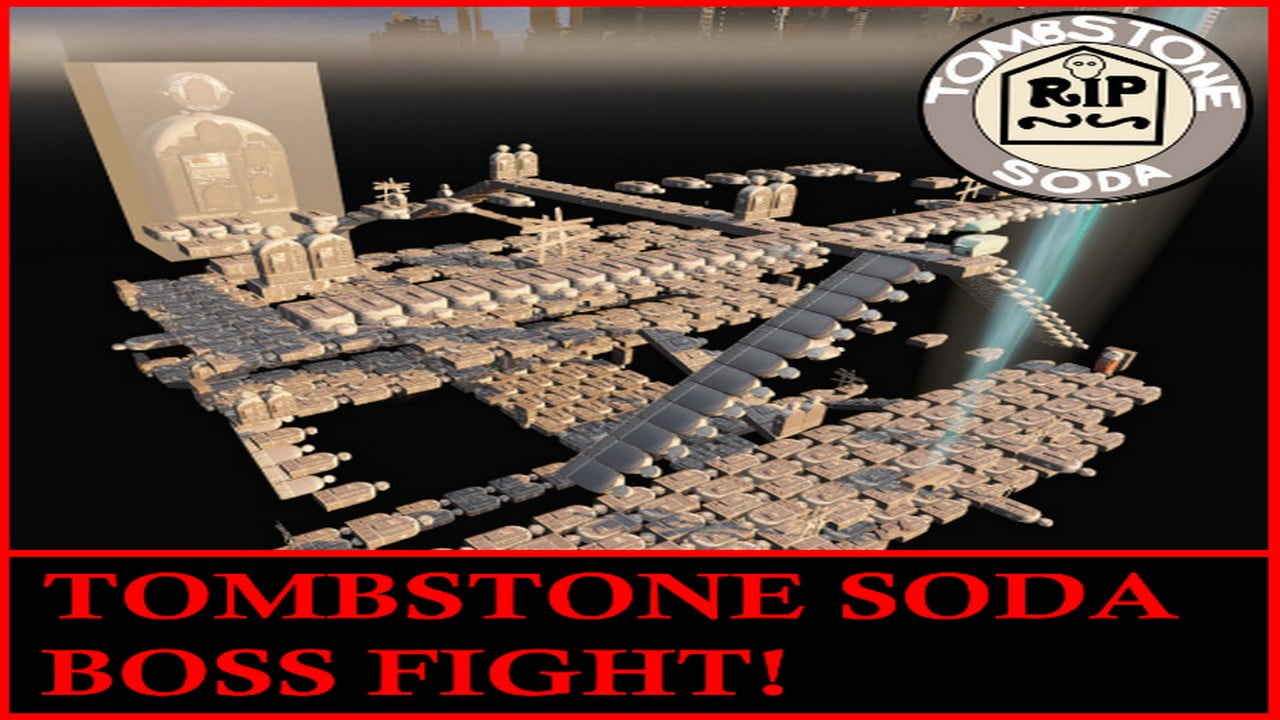 THE NOT-SO LONG AWAITED BOSS FIGHT IS HERE!….Okay I’m going to be honest with you here, this map didn’t start that seriously (obviously since its made out of Tombstone Soda) but now here we are.

1. Get to the top of the map and fill the bottles to get rid of the Giant Tombstone’s shield.

2. Get an explosive weapon and shoot its weak points (the weak points are 6 green spots, you will know you shot it when the tiny tombstones on the Giant Tombstone disappear and a noise will play).

3. Go back to the spawn area where a door used to be locked and press the button to defeat the Giant Tombstone

4. Embrace the other perks.

Just so you all can know what you are about to walk in on: This is a meme of a map I felt like I had to make after NoahJ456 said he wanted it while playing my other map “Nacht Der Untombston”, but just because its a meme map doesn’t mean it will be a walk in the park, I’ve actually made the map difficult in many different ways to make it feel a little bit more like a boss fight.

If you are playing on solo, be aware that this map is pretty difficult. Is the map possible to beat on solo? Yes, it took me a while to beat it myself, but I wanted to make sure it was possible before I uploaded it and I finally did, it took me over thirty tries or more however.

I recommend that if you want a true experience on this, play it on solo, 2-4 players makes it too easy since the map was made for a solo experience.

There is no Quick Revive (to add more difficulty) you can only get it out of Der Wonderfiz or you can also try Whose Who. However if you beat the boss, you can buy it along with gobble gum

Is Tombstone Soda actually in the map as a perk? The machine isn’t since it goes away on solo, but if you are on Co-op, the bottle will be in Der Wonderfiz.

This version of Wonderfiz has a glitch, if you see a Speed Cola bottle, don’t pick it up because it is actually staminup

The wonder weapons are: Blundergat, Thundergun, Raygun, and Raygun MK2. All the other weapons are from Black Ops 2 except for some BO3 weapons.

you can’t fall off the map since I put invisible walls every where, but you can fall to your death, so keep that in mind.

Want some developer tips? Stay on the spawn room for 3 rounds and collect as many points as possible with the M1911, Skip the starting weapons and either buy the Uzi or the Remington, Try to get power on by round 3-4, buy the MP40 or Spaz12, try getting a wonder weapon, You get bonus points for killing Napalm Zombies instead of letting them explode, and try to get either Quick Revive or Whose Who out of Der Wunderfiz, Widows Wine is a huge help, if you get cornered at Pack A Punch there are slides next to it that you can escape with.

try not to take the map too seriously, its just a Tombstone meme to be fair.

T7mods.com was a huge help in developing this map