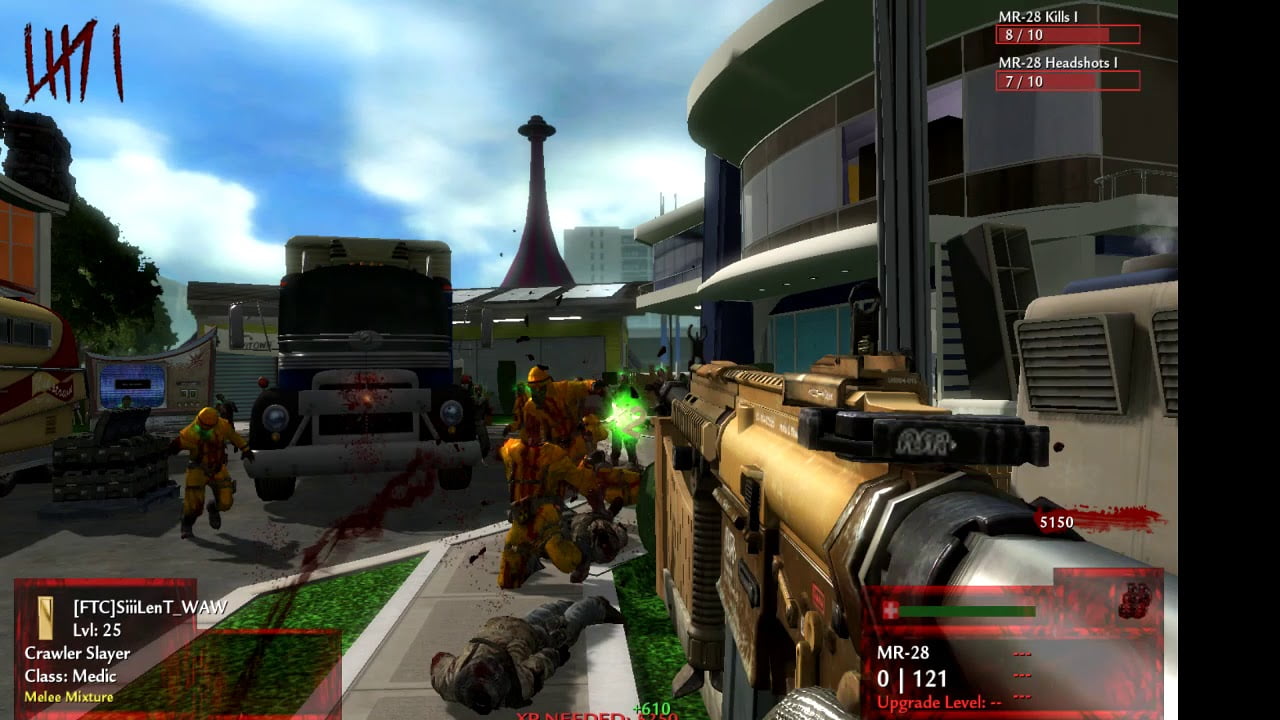 T4M is required to play this mod and any map with this mod on it!

The Realism Mod allows you to level up your character and unlock new perks and weapons/attachments while you do so! Right now this is the only map featuring this mod, but there will be more maps in the future and your character progress will transfer between maps making this the ultimate zombie-slaying experience!

You can fully customize the game settings from easy to insane, and turn special features on/off to play the game the way you want to! Choose between 5 different character classes (Medic, Assault, Tank, Breacher & Demolitionist), pick a starting weapon and unlock achievements to earn ways to customize your weapon and or character!

he mod features about 50 guns, and each weapon has attachments for you to unlock by getting kills with that weapon. Other features of the mod are:
-BO3 panzer soldat
-Juggernauts ( melee and minigun )
-Nova Crawlers
-Special zombies ( Kamikaze and Acid )
-Supply drops ( going from just points to OP special weapons, sentry guns and guard dogs )
-Easy, Normal, Hard, Insane and Realism difficulty ( last two are unlocked by prestiging ). Realism mode has no health regeneration, and plays more like an old fashionate shooter like Doom or Quake.
-Stat tracking: The Zombie Realism Mod 3.0 keeps track of just about every stat you can think of allowing you to know exactly how you are doing at all times. Wanna know how many headshots you got this game, how many times you’ve hit the mystery box, how many explosive kills you got, perks bought, downs, revives, boss kills, and many more…we keep track of all of it for you.
-Lots of smaller features like a viewmodel ammo-counter for some guns, dual wield guns (sync fire) with 3rd person anims, 4 different grenade types, custom wall buys, bo3 style pause menu, zombies can spawn in gibbed and where WaW models allow it multiple gibbing is possible and lots, lots more!!


For more information and details i suggest looking at Tomikaze’s or my youtube channel, or just get playing and find out for yourself!


CREDITS:
Tomikaze – Had the idea for seeing an updated version of the Realism mod get made as well as many of the features that went into it. He also tested the mod once or twice ; )
This whole project would not have been completed without the input and enthousiasm of you! Thanks man!

MikeVLC – letting us use NUK37OWN to introduce the mod to the community, being the first one and getting everything working with my horrible instructions! Big thanks!

Treminaor – Huge thanks for a custom version of the UGX installer! As well as scripting help in the past and the use of the UGX-style points HUD.