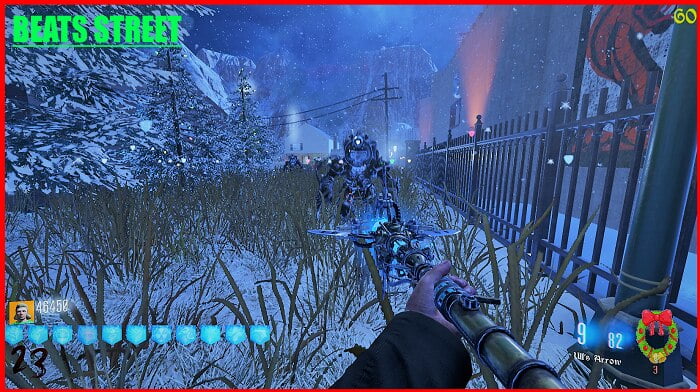 After a surprise nuclear attack by North Korea on New Year’s Eve 2018 occurred across the U.S, our heroes returned to their beloved Colorado block in a state of ruin. Agents Snake, Tony, and Sklirt all moved on to live normal lives for 5 years until Agent Snake was approached by Dr.Richtofen, who claims they have a special connection.


The three agents decide to collaborate with the doctor as he promised a way to redeem the souls of the lives lost on Beats Street using the all-powerful Dude Ring.

But what are the doctor’s motives? Our heroes grow more suspicious by the minute as the truth unravels itself in the third chapter of the Beats Universe-

– 12 Perks including a custom perk, Monster Energy, (Fire while Sprinting) and a new way to obtain perks

– The Return of the Panzer Soldat (SDFM)

– Round Based “Super” Easter Egg

– Level-spanning Sound design with New Year’s music, as well as ambient sound design throughout the map.

– Buildable Power switch, as well as the inclusion of traps (HarryBo21 and Symbo)

+ ♥♥♥♥♥♥♥(SDFM) for Panzer Soldat Script
+ HarryBo21 for his Perks, Weapons, Staffs and Soul Box Scripts
+ MakeCents for his Soul Box script
+ QuentinFTL for his LUA Inventory
+ Skye for his MWR guns and camo template
+ BlackShadow for being a Complete Beat