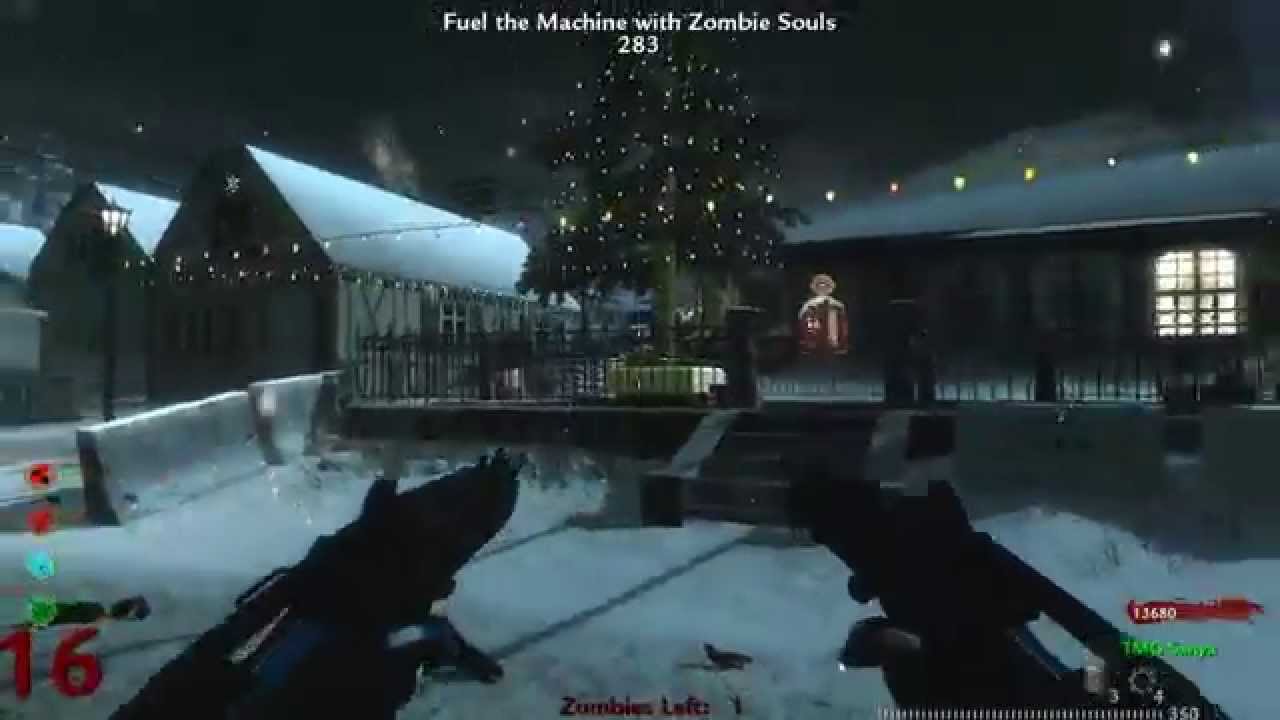 The Basics: Since at the time I am writing this the TMG website is down; allow me to create my own Christmas lore for this custom zombie map. “Many years ago the citizens of the small town of TMG hatched a plan to kidnap Santa and hold him ransom in exchange for all the toys at the North Pole.  Well, Mrs Claus, who was cheating on him at the time with the head elf, Lord Elrond, saw this as the perfect chance to get rid of the big man in red. So, she refused to send the toys to the selfish town of TMG and in retaliation the townspeople feasted on the living body of Santa even parading his organs throughout the streets and taking turns wearing his skin as a costume. The town is now cursed and the dead have come back for revenge…will you help this town of unforgiven souls?” Oh yea…Merry Christmas!

What We Like: From what I understand this map was made in like a month, which is really impressive because it is a LOT of fun. The layout of the level is great and has some fun camping areas as well as a few places to run trains. There are tons of cool weapons to try out and don’t forget to PAP them for additional fun. There is a fun easter egg to complete with a pretty good amount of variety especially considering this was just a quickly made seasonal map. There is even a part where each player is given a different objective to complete simultaneously and all must be completed before you are allowed to progress. Then to finish the map you have to assemble a “save Christmas machine” and collect a ton of zombie souls inside it to break the curse of Santa’s Revenge. Even though it is similar to a buyable ending it is a very welcome and much more fun take the formula.

What We Didn’t Like: It wasn’t until after I gave each townsfolk his gifts and finished the other points/kills/headshots challenge that each person gave up their part to the “save Christmas machine”. It would have been nice to have completed one person’s challenge and gotten their part to the machine to wet my appetite for this strange mystery and then have had to go onto the next townsfolk and then the next, but that’s not the way it played out. Instead you have no idea what you are working toward and then you just have a bunch of parts dumped in your lap at the end. It isn’t the world’s biggest gripe, but it was enough to make me really wonder why they chose to do it the way they did.

Final Word: There is no denying that this map is super fun and the insanity at the end trying to fill the soul chamber is really great too especially seeing the newly slaughtered souls flying toward the machine to give you that added feeling of satisfaction. This one is sure to be near the top of everyone’s yearly played Christmas maps. Grab some friends and go play this one now!