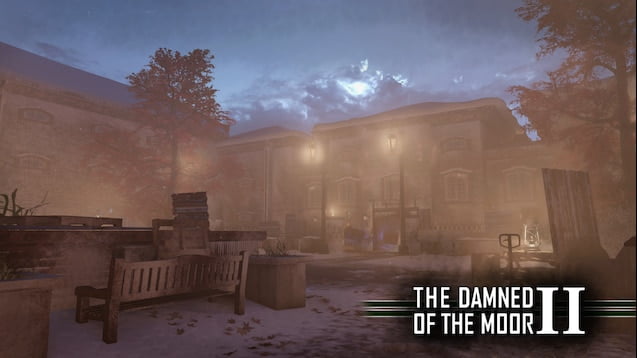 THE DAMNED OF THE MOOR II
By: AlfaThesus

How To
Play the Entire Collection here:

The Damned of the Moor 2

*Important: It is recommended that this map is played with the graphical setting Volumetric Lighting enabled. Without this setting enabled, certain features will not function as intended and areas of the level will not look as they do in the provided Screenshots/Videos. Thanks!

“The Damned of the Moor 2” is set in an abandoned prison in English Moorland and occurs right after the original’s ending. It features a variety of environments to both challenge and benefit the player (such as tight corridors, wide open “training” areas, maze-like sections, etc) which also play very different from one and another.

This map was made roughly half the time that I took to make my previous maps (6 months as opposed to 11-13ish) so naturally it is smaller and less feature-complete. However, I wanted to work on a smaller project and still be able to create something that’s hopefully still enjoyable :^)

Feedback is appreciated, feel free to comment/message me with inquires/suggestions/complaints :^)

(please let me know if I have missed anyone)