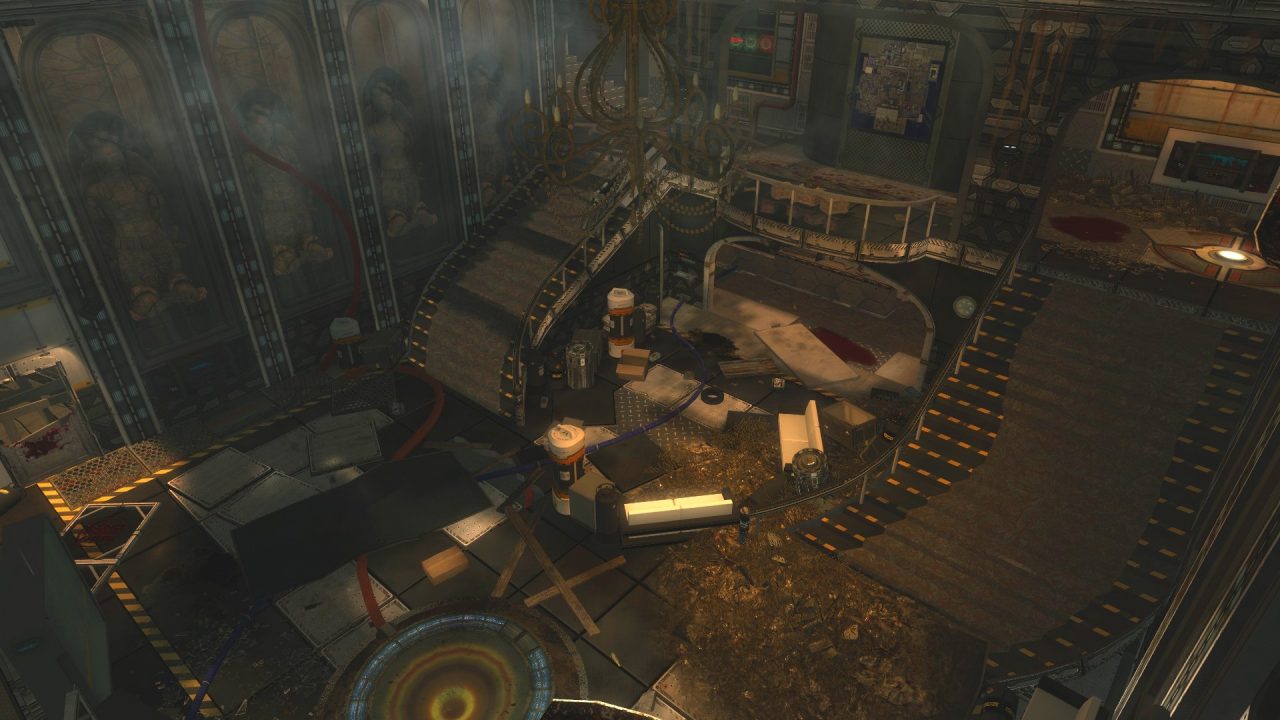 Welcome to Kino: The Rebirth
This is a remake of the fan favorite map Kino Der Toten, it’s been revamped with a futuristic theme, new weaponry and features, hope you enjoy!
Special thanks to tomikaze for the idea for this map
Credits 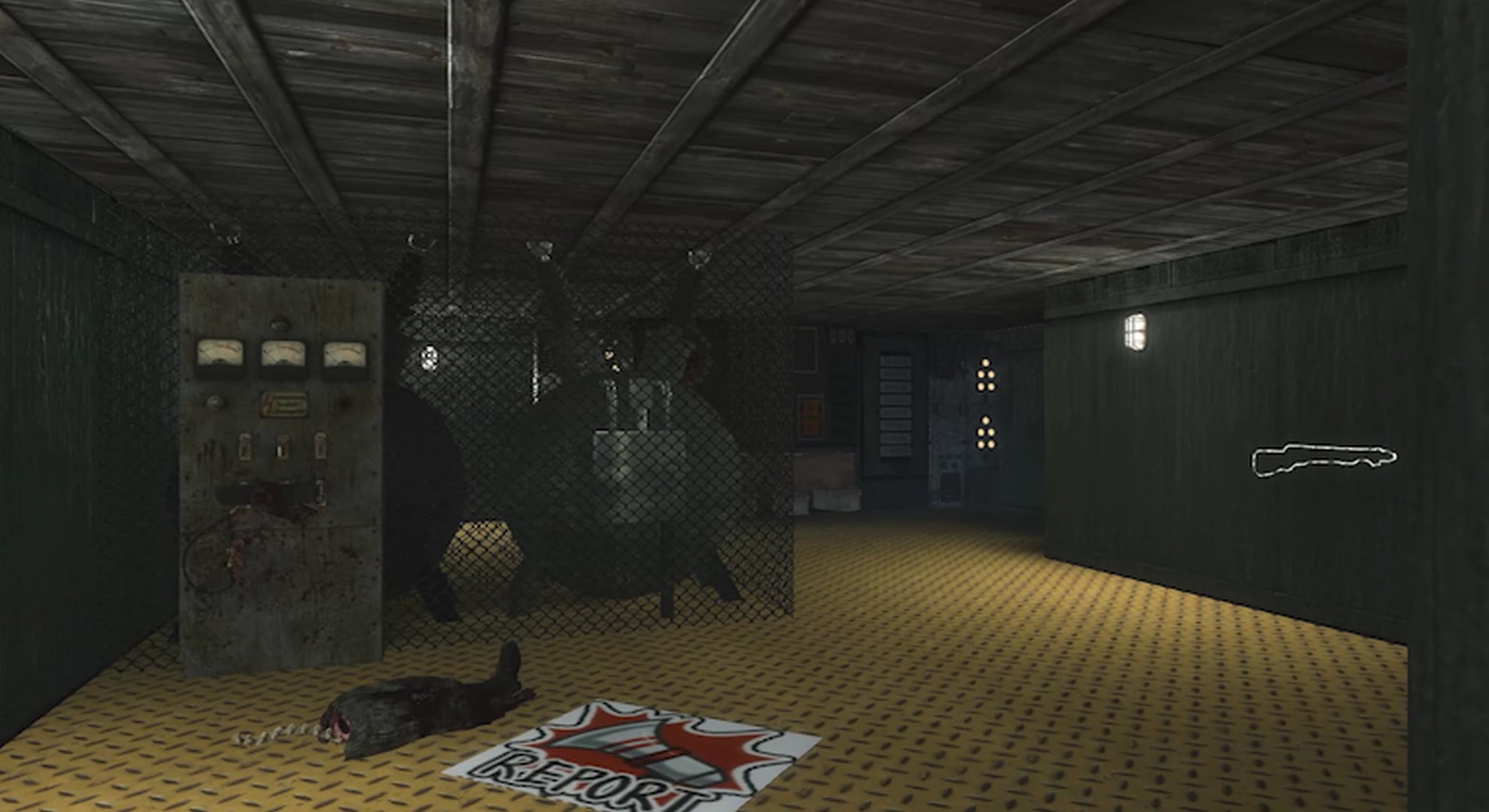 The Skeld
Version: 1.1 By: dovalslayer

This is the first map I’ve released, and it is based off “The Skeld” from Among Us, the map has most basic features as listed below:

4 Main Perks
-Juggernog
-Quick Revive
-Speed Cola
-Double Tap
Pack-a-Punch
Dogs
Risers
Window Spawns
Ceiling Spawns
Small Easter Eggs
Breakable Walls (Zombie Barrier Spawns)
Custom Textures
Shootable Doors
Power Switch
Buyable Doors
Moving Mystery Box
Buyable Guns
Buyable Ray Gun
Buyable Ending
The map is mostly tight hallways with some also tightly enclosed rooms and a few more open spaces. It has around 15 separate rooms. There are a lot of hidden door buys and ways to open some doors. Look out for some tequila bottles to get to the pack-a-punch
Known Bugs:
The Jukebox does not work
When you have perks it shows the icons twice but does not affect anything other than the hud. 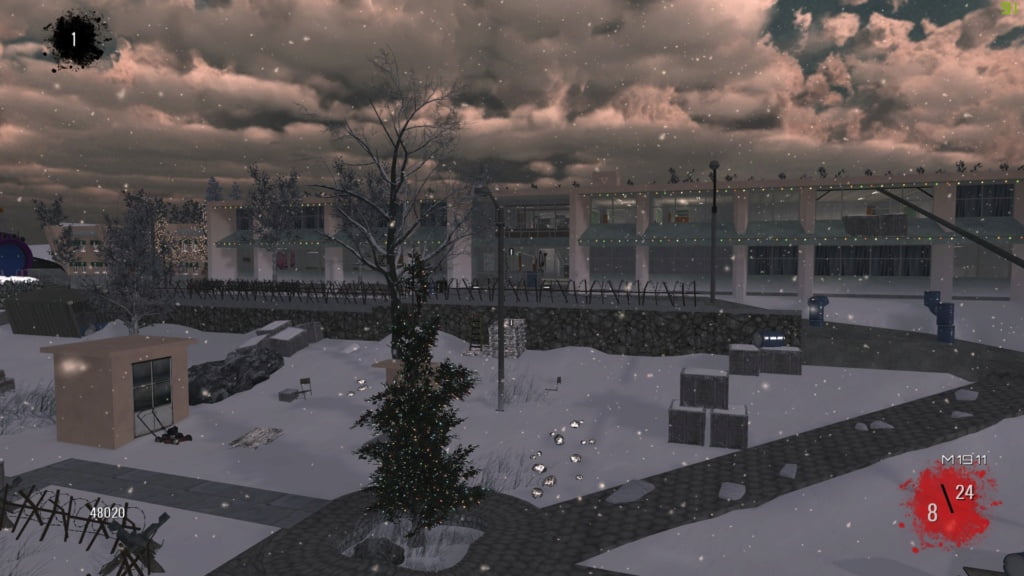 A little Christmas variant of my last map, with some new additions. I hope you enjoy it. 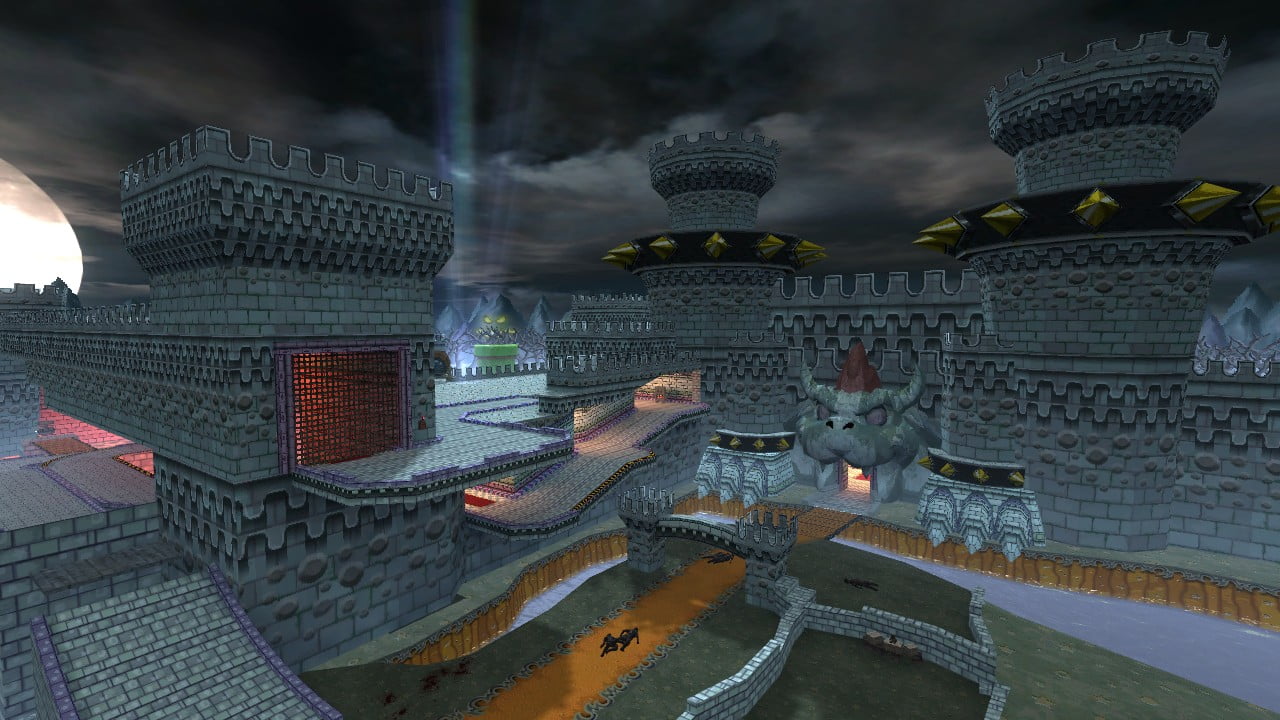 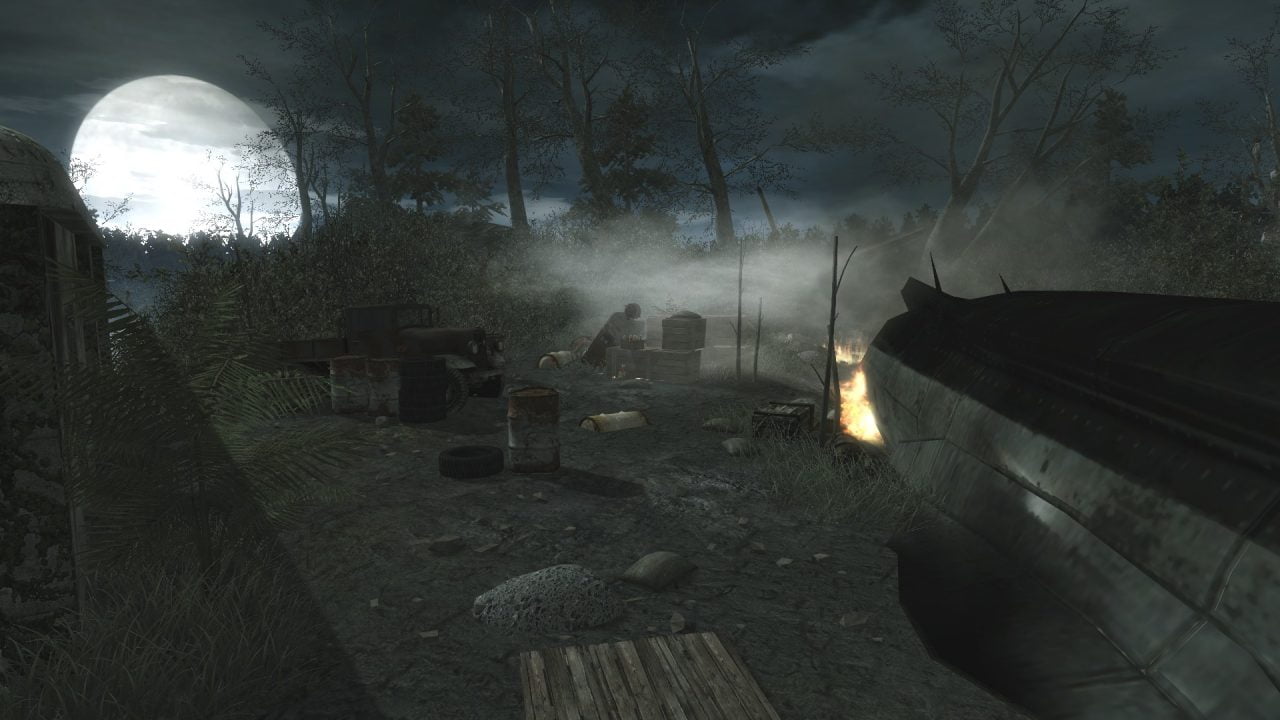 A cross between Nacht der Untoten, Shi No Numa and Mob of the Dead.

Shi No Mori is a complete recreation of the first zombies map released by Treyarch, with some slight alterations.
You have access to the outside and have a room dedicated to the power switch.
With an array of perks from almost all treyarch games, custom weapons, songs and easter eggs, Shi No Mori enhances the experience of
Nacht der Untoten to a whole new level.

The Map plays well and should give you some nostalgia while also giving you a feeling of freshness.

You can decide how you want to play the map. There are three main ways to play:

– Classic: Play just like in the old days and do not open any additional space so only the classic Nacht der Untoten layout can be played.

– Embracing the additons: Open the entire map and enjoy an easier gameplay.

– OP Mode: Completing the easter eggs to gain access to the secret rooms and stock up on perks and weapons.

Creator of the map:

For the people asking: Yes, the map was created from scratch by me. I took a lot of screenshots from nacht to rebuild the entire map myself.

If you come across any issues, bugs or have any questions please send me a message or leave a comment.

I will be making a full easter egg video soon. But until then this should help

Shoot three skulls that are outside the map to open the secret secret room with perks, pap, the game ending, the Lab, and Staff room. This needs to be completed in order to start with the other easter eggs.

Skull locations for the secret room. View at your own risk if you want to spoil the hunt for them. FYI there are more then just this easter egg.

Step 1. Go to the lab and press the middle red button to start the EE. First you need to find the only five burning barrels around the map and shoot them in a specific order.  (you will hear sounds if you hit the right ones) This opens the door to the Staff room where you can pick them up.

Step 2. Go back down to the Lab and press the left button to start with the four staff challenges.

First challenge: Burn the bodies around the plane area.

Second Challenge: Shoot the sparking lights and electricity pylons around the map with the Wunderwaffe (there a five of them).

Third Challenge: Shoot the leaking pipes (you can hear dripping sound when near to them and there are only three of them).

Fourth Challenge: Destroy the crashed Japanese Zero’s around the map with explosives (there are three and not to hard to see).

Step 3. You can now grab the staffs in the Staff room located by the first burning barrel you need to shoot. If you head back to the lab and press the last button you can recive another gift just bewere you will lose your gun.


Besides these, there are many other smaller easter eggs on the map you can look for and have fun with.

While doing the staff challenges you will be hearing sounds for completion so you know when your done aswell as the corresponding lights down in the lab.

– Zombies don’t grab you anymore
– Redone the napalm boss zombie – now the acutall model and effects of the one in Shangri-La
– Balenced nearly all weapons to be nice to play with
– Message added at the start to warn about the issue with quick restart and death-restart (Reload the game and mod to fix this issue)
– Perk limit set to 12
– Staffs are available in the mystery box if they are lost.

Thank you to all here and the ugx help desk for your support. If you feel like you should be on here please send me a message! 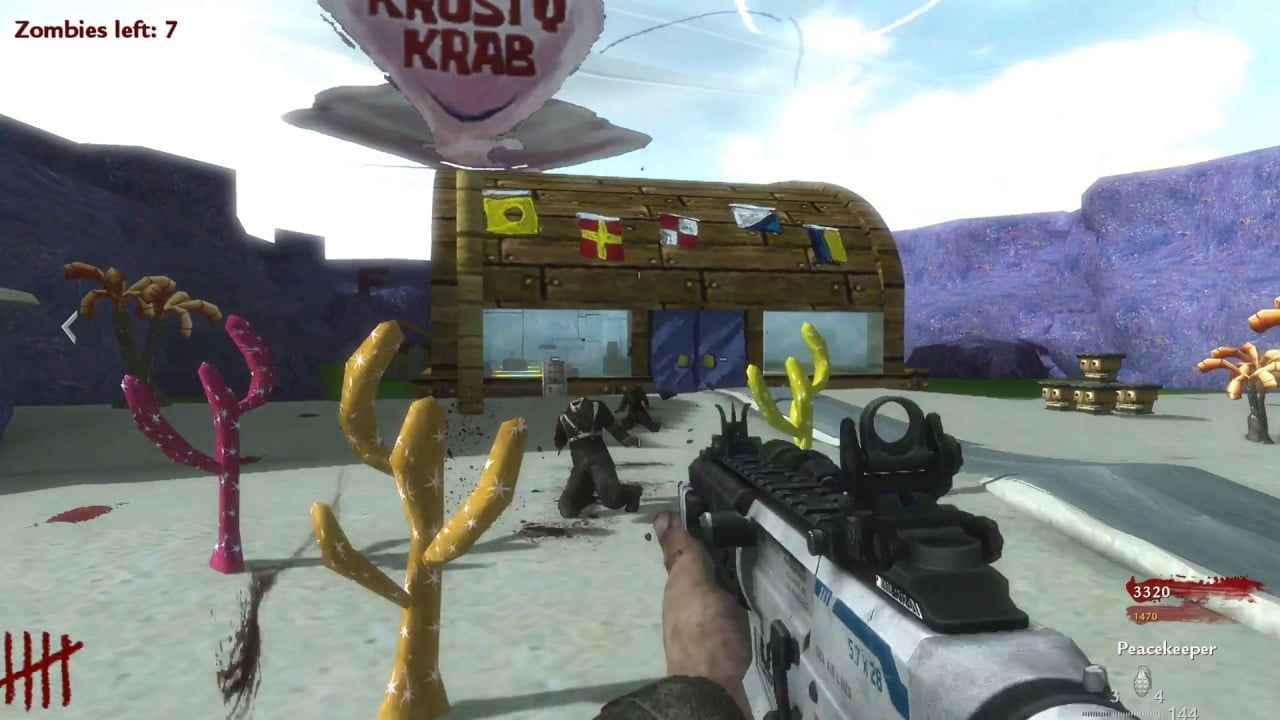 Fixed: What I did is suppressing falling damages so that the parkour falling doesn’t reset the game.

Also, given that PHD might become less useful (unless for grenades protection), I have also added a double dew perk inside, which multiplies your killing score by 2.

The map basically has playable spongebob character houses, 2 map exports from the game Spongebob: Battle for Bikini bottom, plus a concert area. Playable areas include:

This map includes some intense parkour, but nothing is too difficult where you cant complete it. The best perks are behind a bit of parkour, i wont tell you which because you wouldnt like it. Falling into the pit makes you go down, so be super careful! Ill possibly be balancing this if it is too difficult for some, but its a nice challenge required to progress in the map. The 2 areas that are accessed through the toll booth in the goober basement are full map exports, clipped and slightly modified for playability from the game SB:BFBB. To use the Taxi stands, you must buy the 5,000 toll booth in the goober area then you may teleport with them.

Ok, so this is going to be extremely difficult as the map has been dead / in development for 2 or so years, so please please please tell me if you helped me in any way. Ill list everything i know, but i know for sure im going to miss a dozen of you

Thanks for taking a look, if you have any suggestions or find any bugs report them to me via PM, ill be doing a v1.1 overhaul in about 3 or 4 weeks fixing everything i can find and or whatever people report. Sorry for the long wait on the map and i hope it lives up to its name.

Small side note, i love watching peoples videos so if you make a youtube video post it in the comments 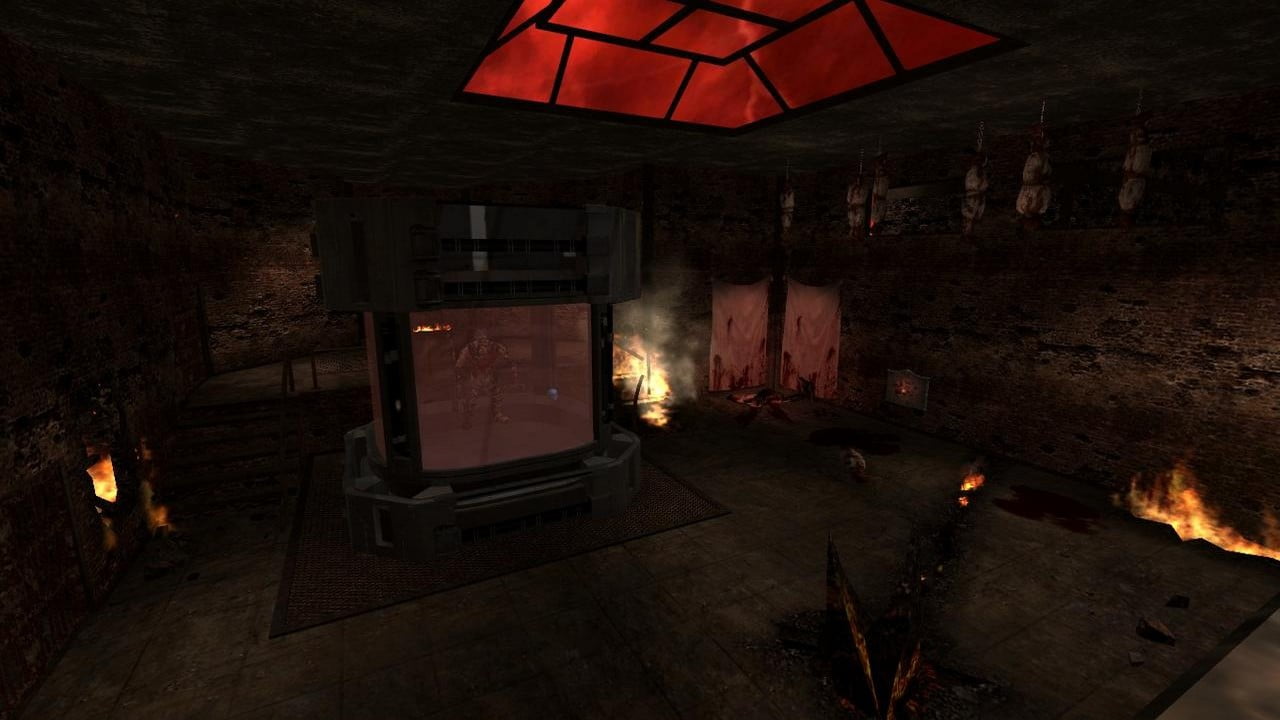 Not really a Der Riese remake, but more a reimagination of the old classic. The layout is very similar, but there are a few twists and new areas to explore as well!
Follow the quest to dive into an adventure traveling between different dimensions, finding yourself at the gates of hell fighting off the evil horde!
Travel between the normal and the hell dimension, playing in two completely different looking maps in the same game!

This map requires T4M and it runs the Realism 3.0 mod, allowing you to level up your character and weapons and upgrade them while you progress.

After installing the map, run the mod named ‘New Realism’ to load the map!

Super special thanks to:
Tomikaze  –  The evil mastermind himself!

None of these Realism maps, or even the new-realism mod itself would not have existed without you! It was insanely fun comming up with all the ideas and maps, and talking everything through.

You can fully customize the game settings from easy to insane, and turn special features on/off to play the game the way you want to! Choose between 5 different character classes (Medic, Assault, Tank, Breacher & Demolitionist), pick a starting weapon and unlock achievements to earn ways to customize your weapon and or character!The mod features about 50 guns, and each weapon has attachments for you to unlock by getting kills with that weapon. Other features of the mod are:

-Easy, Normal, Hard, Insane and Realism difficulty ( last two are unlocked by prestiging ). Realism mode has no health regeneration, and plays more like an old fashionate shooter like Doom or Quake.

-Stat tracking: The Zombie Realism Mod 3.0 keeps track of just about every stat you can think of allowing you to know exactly how you are doing at all times. Wanna know how many headshots you got this game, how many times you’ve hit the mystery box, how many explosive kills you got, perks bought, downs, revives, boss kills, and many more…we keep track of all of it for you.

(pretty much the Realism Mod 3.0 credits, as i did most of the mapping work myself)

Treminaor – thanks for a custom version of the UGX installer! As well as scripting help in the past and the use of the UGX-style points HUD. 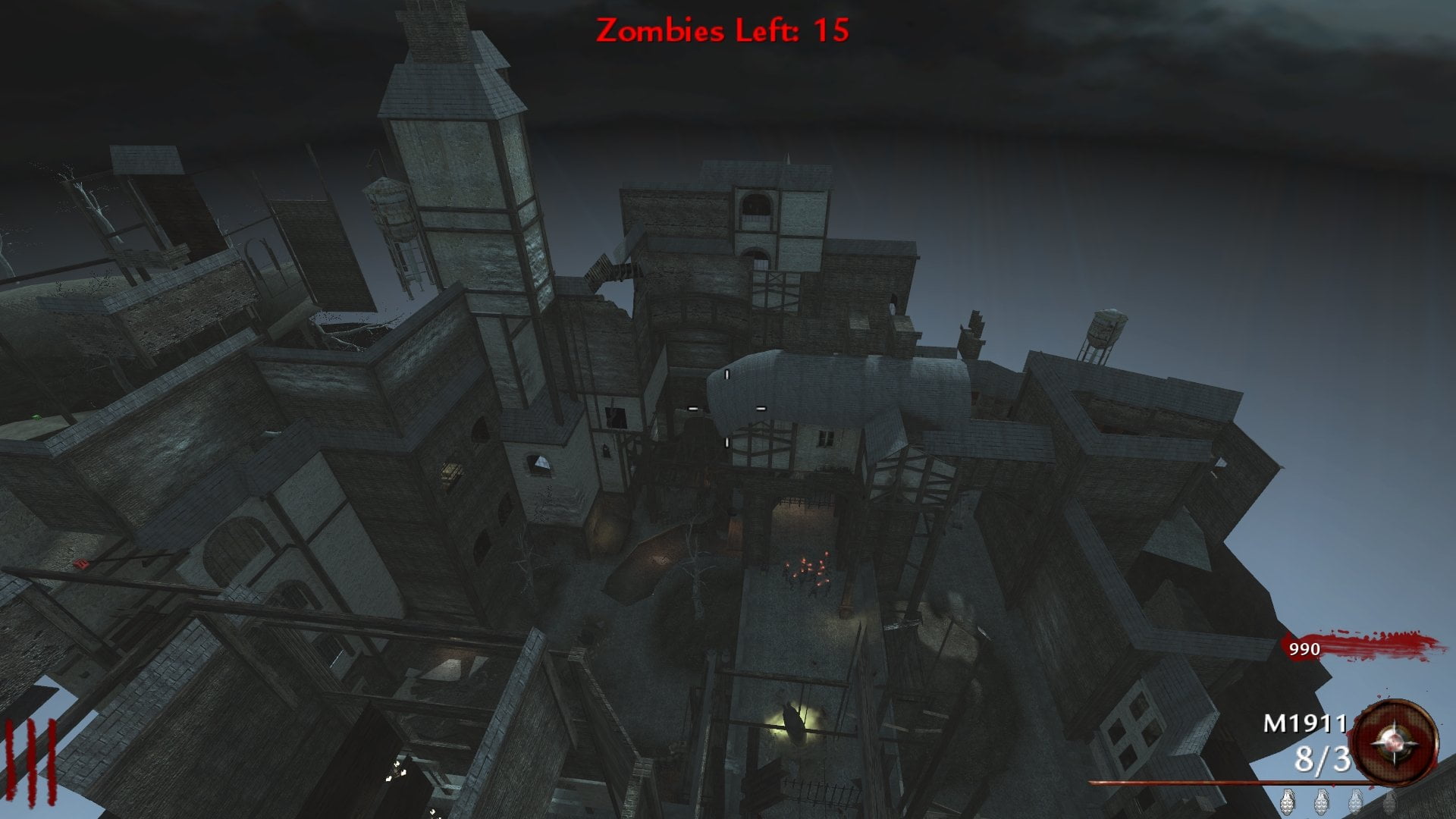 Primo victoria: gives you a shield that generates after not getting hit for a while. (100 health)
Blitzkrieg soda: gives you special grenades that deals massive damage and also gas zombies.
Chainbind rootbeer: gives you the ability to slow and stun zombies for a second, kniving slows them garanteed and shooting has a smaller chance.
Raging devil rum: a zombie goes raging onto you and takes down everything on his path.
Baron Samedi: Turn into a zombie after being takedown, wander around killing zombies or gather brains to restore your humanity.
Repair Rum: Repair barriers instantly!
Rewind Time Barcardi: Set your safe location (Tatical insertion), when you are about to die instead you will teleport to that safe location. 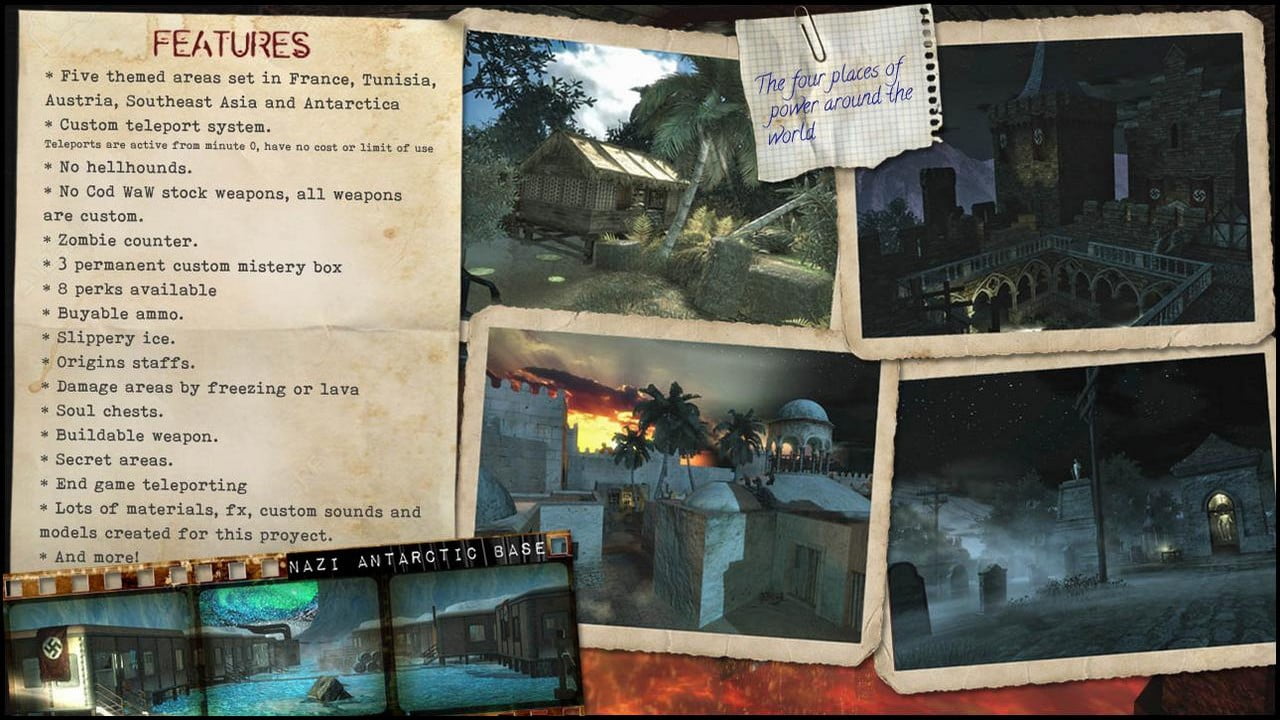 *Fixed the juggernaut perk with 250 points of health

* Added an optional version without nudity

Look at pics for discription

BUGS WARNING:
The hintstrings are not updated, so when the power is turned on, messages from perks dispensers and PAP are not updated.
Despite this, everything is functional:  the perks can be purchased without problems, and the weapons can be improved.
As long as you have the necessary amount of points, of course. 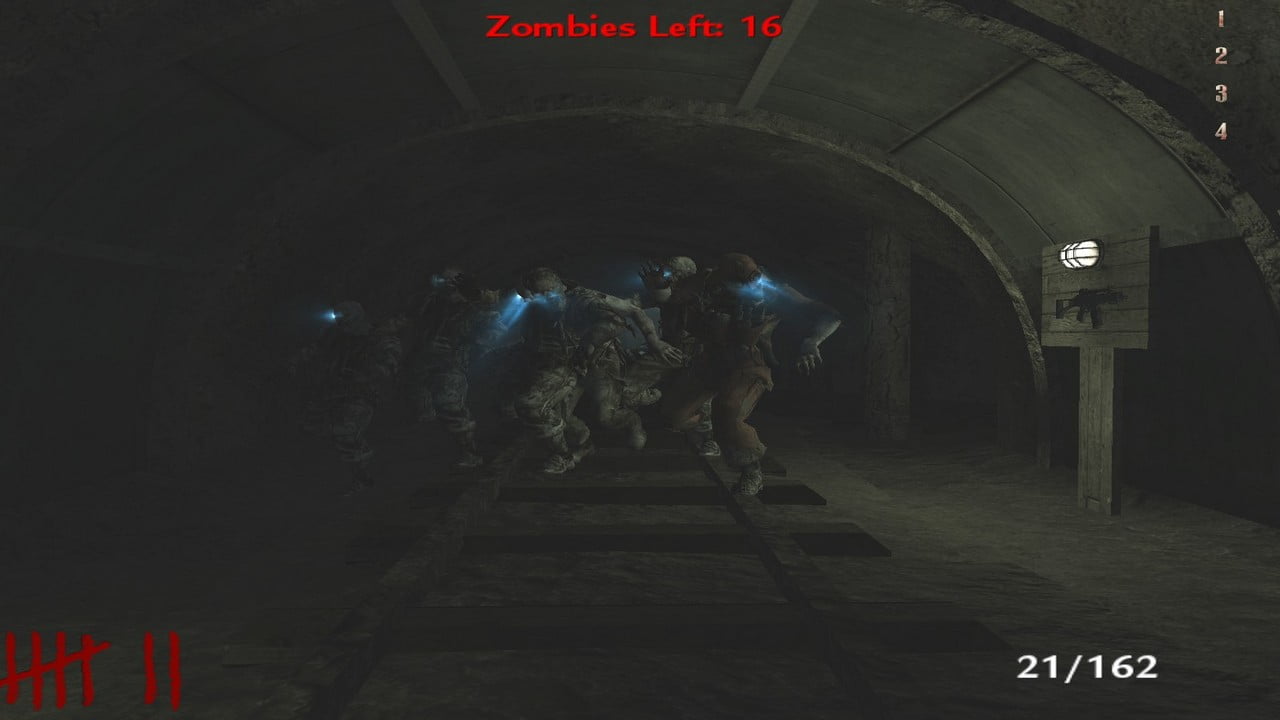 Story
Snowblind takes place in Austria in a mining camp for Jewish slaves during World War 2.
The camp was under Nazi control. When the nazis heard that they had lost the war they abandoned the camp.

Primo victoria: gives you a shield that generates after not getting hit for a while.
Blitzkrieg soda: gives you special grenades that deals massive damage and also gas zombies.
Chainbind rootbeer: gives you the ability to slow and stun zombies for a second, kniving slows them garanteed and shooting has a smaller chance.
Raging devil rum: a zombie goes raging onto you and takes down everything on his path.
Credits:
Community
Treyarch & Activision
UGX Mods, Zombiemodding, Modme & CustomCodMapping