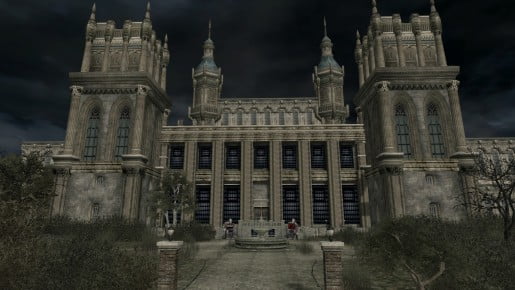 This is the final version of Wayne Manor updated and moved from the contest boards to here. This is my largest and most exciting map to date. I chose Wayne Manor as my ideal place to go during the zombie apocalypse because I figured I would have everything I needed to survive. I mean you’d be under the same roof of the worlds greatest detective and crimefighter, and oh yea there’s the BATCAVE!

Little did I know that Batman was away searching for Robin who had gone missing and that the Joker had taken over Wayne Manor. So now Joker has me and Robin and is holding us hostage.

Two years ago Joker escaped Arkham Asylum along with several of Gotham’s other notorious criminals. What was expected to be mass chaos in Gotham turned out to be the complete opposite. Following the escape there were no sightings or crimes regarding Joker, it was as if he had disappeared. Dick Greyson (Nightwing) left to establish himself in another city (Bludhaven) and Batman began training Jason Todd to be the new Robin. One night Jason went on a solo run but never returned. Night after night Batman scoured the city, running down every lead, pressing every underworld connection, but no one had seen any sign of Robin. He expanded his search on into Bludhaven with the assistance of Nightwing. One night while returning home from Bludhaven after months of  searching Batman noticed he had a missed call and a voice message…

Voicemail machine: “You have one missed call”

Joker: “Ring Ring! So how do you keep a secret from the world’s greatest detective? Well do you know? It’s easy, you stick it right in front of him. Right under his long pointy nose, and wait Ha Ha”

BluntStuffy – General help and a huge help creating the epic boss battle. It wouldn’t of happened without him.

DidUknowiPwn – Engine mod
elfenliedtopfan5 – easter egg song
OfficialMT22 – Custom shaders
scriptz – buildables
UGX – easy fx
UGX Rorke – MW2 weapons
TomBMX – Lime and Lemon
and if I left anyone out please let me know and i’ll add you to the list, Thank you all for your support